Prime Minister Abiy Ahmed says his life was in danger when some soldiers came to Addis Ababa to protest last week.


The Ethiopian Prime Minister Dr. Abiy Ahmed claimed the protesting Ethiopian soldiers wanted to kill him when they came to his office last week. The prime minister said the intention of the soldiers who came to the capital city, Addis Ababa last week was to “abort the ongoing change in the country” in an interview with the government owned Ethiopian television. He added the plan and the way the soldiers came to his office was illegal and against the army rules.

Dr. Abiy also said after the situation was brought under control because he was a fellow soldier, but some forces or those who were behind the planned assassination said he escaped our plan to kill him.

If what the prime minister’s claim is true, it shows just like in the rest of the Ethiopian society law and order is breaking down in the Ethiopian army.  The prime minister’s claim should be taken with a grain of salt, but if the Ethiopian army is destabilizing it is extremely dangerous for the whole country. We hope Dr. Abiy is trying to get public sympathy by saying some members of the armed forces planned to kill me. It has been obvious for all Ethiopians the honey moon is about to be over and the Ethiopian prime minister is starting to face the real problems of Ethiopia. Dr. Abiy Ahmed and those who propelled him to power were riding the enormous waves of desire for change in Ethiopia. Dr. Abiy misunderstood the Ethiopian population’s need for change and indifference for EPRDF as love for himself. Six months ago any Ethiopian politician could have been perfectly fitted to become a prime minister as long as he or she trashed the accomplishments of the previous EPRDF governments.

It is not surprising to see Prime Minister Abiy Ahmed Ali waking up to the reality of Ethiopian politics.   What is surprising is the prime minister's comments this week are very different to how he responded last week to soldiers protesting and arriving to the capital.  As you can see in the above video he seems not worried about the situation and he is seen laughing and mingling with the soldiers. In fact he said it was exaggerated and inflamed by social media. When Dr Abiy Ahmed was speaking about the incident this week in the Ethiopian parliament he said he was burning with anger inside despite appearing happy doing pushups and smiling with the protesting soldiers.

Dr. Abiy Ahmed is putting Ethiopia in danger because he aligned himself with the wrong groups. Lately we are detecting the prime minister is losing confidence on himself. The main problem or challenge is not going to come from Tigrai, Somali, OLF or the weak groups pretending to be powerful. The real danger to the Ethiopian prime minister is going to come from the Amara regional state especially those who are within his government. 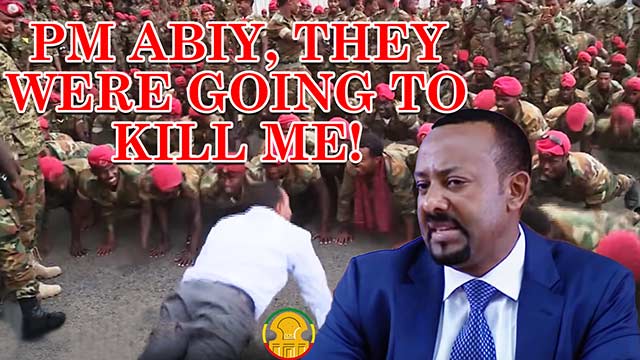 Commentary- Path forward for TPLF and the Tigrai People

Achieving solutions with farmers is not radical: why is it so hard?