Ethiopia to get US$2.9 billion financing package from IMF 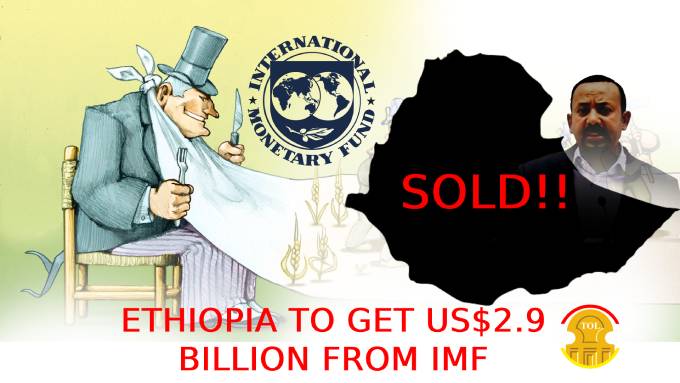 Ethiopia to get US$2.9 billion financing package from IMF Abiy Ahmed signs Ethiopian economy to IMF.

The International Monetary Fund (IMF) announced today December 11, 2019 that it has reached an agreement with the Ethiopian government on a US$2.9 billion financing package. The funds will be dispensed over three years after IMF’s Fund’s Executive Board approve the agreement.

style="margin-left: 80px;">“The Ethiopian government and the IMF staff team reached preliminary agreement, subject to approval by the Fund’s Executive Board, on policies that could constitute the basis for Ethiopia’s new program supported by the ECF and EFF arrangements. The overall objective of the program would be to support implementation of the authorities’ Homegrown Economic Reform Program.  “The Fund-supported program would consist of five main pillars: (1) durably address the foreign exchange shortage and transition to a more flexible exchange rate regime; (2) strengthen oversight and management of state-owned enterprises to contain debt vulnerabilities; (3) strengthen domestic revenue mobilization and expenditure efficiency to create space for adequate poverty-reducing and essential infrastructure spending; (4) reform the financial sector to support private investment and modernize the monetary policy framework; and (5) strengthen the supervisory framework and financial safety nets. “We will submit the program request to the Executive Board for its consideration.”

If the agreement is approved by the IMF Executive Board, Ethiopia’s economy will be controlled by the IMF and all the national assets of the country like Ethiopian Airlines and Ethio-Telecom will be sold to Western countries. The Ethiopian people should get ready for prices of consumer goods to sky rocket.

Why did the IMF decided to give such a large amount of funds to Ethiopia? The answer is because they have the right man to do their dirty job from within Ethiopia and that man is Abiy Ahmed. As most of the world knows the IMF which acts as a colonial arm of the western world is not out there to help poor economies grow by providing them cheap loans, instead it will destroy their economy systematically.

The money from the IMF comes with endless restrictive list of things to do and not to do.  For example the IMF might ask borrowing countries to devalue their currency, open their economy to western markets where local business will be cannibalized by much stronger and aggressive western companies.

The IMF and World Bank which are two faces of the same coin work hand in hand to make sure the third world countries which are mainly none occasion remain poor.

Once you sign on the dotted line and borrow money from the IMF, you are hooked for a long time. Then the IMF would start meddling with the economy, not only that depending how big the loan is IMF will even get involved in the county’s political affairs.

If politicians or leaders of a country start defying the IMF, the country would be asked to pay the loan in ful or IMF will stop providing the funds half way where projects will be half done, but not completed. If IMF demanded full payment it could drive countries to bankruptcy and when the economy collapses public unrest follows. In a way IMF will use the loan as a weapon to force countries to obey what IMF tells them or they will be destroyed.

Now the mercenary Abiy Ahmed has signed the deal with the IMF Ethiopia will be under the western world for a long time to come. We know the late Prime Minister Meles Zenawi has been approached many times to sign  an agreement in order to get a large amount of loan from IMF, but he rejected the loans and their meddling in Ethiopian affairs.

Freweini Mebrahtu was named the 2019 CNN Hero of the Year

Why should I marry a fiancé that cheated on me?