New fresh demonstrations erupted in Oromia state and Oromo activists denounce Ethiopian Prime Minister, Abiy Ahmed. You have to listen to what the Oromo activist Ggege Kiya has said about Dr. Abiy Ahmed.

New fresh demonstrations erupted in Oromia state and Oromo activists are denouncing the Ethiopian Prime Minister, Abiy Ahmed. Instability is spreading in the entire country of Ethiopia like wildfire meanwhile the Dr. Abiy Ahmed is pretending everything in Ethiopia is peaceful and rosy. Thousands of people are out demonstrating against the Abiy government in Oromia regional state.

Somali regional state has active rebellion going on even some members of the Federal Police from Somali state openly condemn Dr. Abiy Ahmed for making venerable for attacks. Tigrai state is simmering and the majority Tigraian population has lost any trust in the federal government. They are angry the federal system which was established in after heavy sacrifice is now being destroyed. 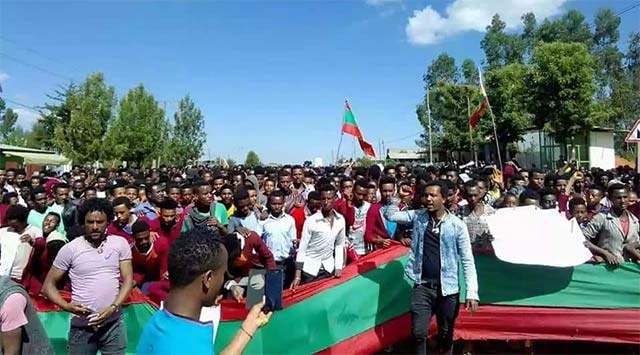 New fesh demonstrations erupted in Oromia state. Instability is spreading to the entire country of Ethiopia.

Targeting Tigrians by Abyi and His Collaborators, WHY?

The Proposed Horn of Africa Economic Integration: A Guide for the Perplexed

Dr. Debretsion Gebremichael said a coordinated attack against Tigrai state and its people is going on now

The jailers in Ethiopia today will be prisoners tomorrow - unending vicious circle?

The optics of corruption, mismanagement, and incompetence

Tragedies of Political Puppetry in Ethiopia

Dissonance With truth and justice in Ethiopia

Where is the Outrage from the Ethiopian Government?

Anarchy and mob-rule in Amhara state of Gedu Andargachew