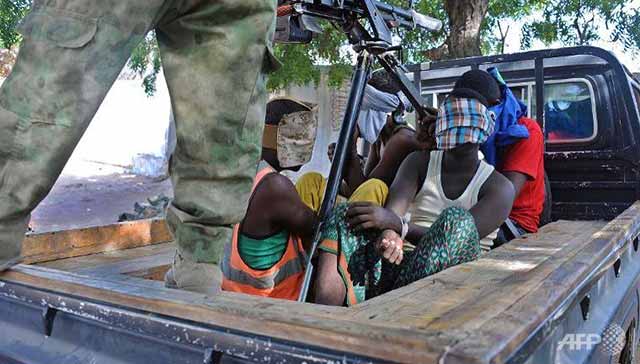 The Surrendering of Zakariya Ismail Ahmed Hersi is a great news, but we think it is not going to be that long before his replacement graduates from Sawa (Eritrean military training center) and takes his place. Eliminating the leaders of Al-Shabab will help on the fight against the terror group, but if the source is not dry they will still keep coming for a long time.

"Zakariya Ahmad was a very senior person who worked with Godane," said regional military official Jama Muse, referring to former Al-Shabab leader Ahmed Abdi Godane, who was killed by a US air strike in September."He was in charge of intelligence and finances. He was one of the senior Al-Shabab commanders who the Americans put a lot of money on their head," he added.

The Ethiopian government has sent thousands of troops to help the African Union Peace Keeping mission in Somalia. The Al-Shabab terrorist group threatened Ethiopia on many occasions, but thanks to the superior security of the Ethiopian gallant army and the Ethiopian people their dream of invading our country is just a pipe dream. Ethiopia maintains a tight heavy military presence at the border with Somalia.

Many of the Al-Shabab terrorists are trained by the one man regime in Eritrea. The Eritrean government has hundreds of military and intelligence advisers with Al-Shabab. The UN monitoring group on somalia and eritrea provided to the United Nations Security Council concrete evidence about Eritrean active support to the Al-Shabab terrorist group. In fact the military commander of Al-Shabab, 43 years old Mukhtar Robow carries an Eritrean passport and the U.S. government is offering $5 million dollars for his head.

While the desperate Eritrean despotic leader is doing what he can to destabilize Ethiopia and distract the miraculous economic progress in the country, the Ethiopian government is not doing much to stop Shaebiya from doing so. Last week a possible Shaebiya agent or a member of the Ethiopian terrorist groups based in Eritrea hijacked MI35 gunship helicopter and took it to Eritrea. According to the ETV news there were two Ethiopian soldiers with him and basically kidnapped them by force. So far we didn’t hear or seen any official reaction from the Ethiopian Federal authorities.

We are wondering for how long are the Ethiopian people going to suffer at the hands of the Eritrean regime and how long is the Ethiopian government going to keep extinguishing fires that are started by the Eritrean gangsters? We think it is long overdue to extinguish the mother of all the fires in the Horn of Africa including Somalia.

Amazing Diplomacy of the terror Regime

Ethiopia should demand for the MI35 helicopter or take military action

Sovereignty and Democracy in Ethiopia: A Reflection on Gebru Asrat’s Book

I am robbed my house in a broad day light - Ms. Zewde Weldebariam