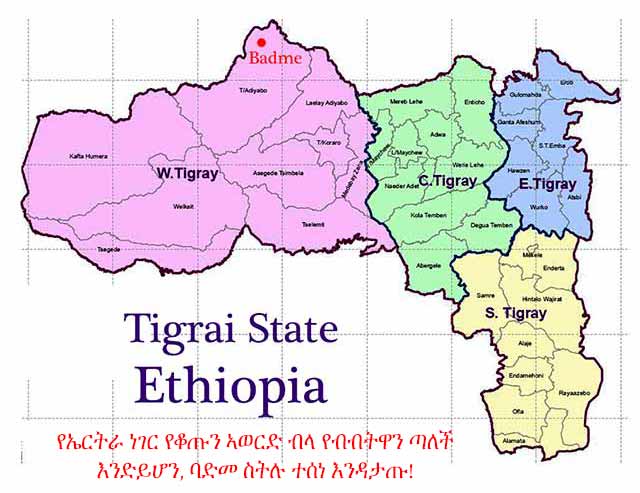 The town of Badme is an integral part of Ethiopia and it will never be part of Eritrea. The Algiers Agreement is null and void any try to revive it is futile.

This week some diehard Eritrean regime supporters held demonstrations in some European and American cities. The demonstrations were supposed to be against Ethiopia. They say Ethiopia is illegally occupying Eritrean territories. One of the towns they claim which is under Ethiopian occupation is Badme.

The Eritrean thuggish leaders and their supporters assert the town of Badme belongs to Eritrea because the long dissolved and forgotten Eritrea Ethiopia Boundary Commission (EEBC) has awarded Badme to Eritrea.

The above claim is beyond wrong on many levels. First off all the town of Badme has never ever been under any Eritrean administration since the Italians curved out Eritrea from Ethiopia.

Second the Algiers Agreement is null and void because Eritrean leaders violated the basic principles of the agreement more than once including expelling the UN observers from Eritrea.

The Eritrea Ethiopia Boundary Commission (EEBC) was rejected by the Ethiopian federal government as “llegal, unjust, and irresponsible” decision. Since both parties didn’t endorse the decision the planned border demarcation didn’t take place. The border now is as it was before the war of 1998.

Ethiopia is not occupying an inch of Eritrea land. If the Ethiopian army is holding some strategic hills which might belong to Eritrea, it does not mean Ethiopia is claiming them. As long as the Eritrean reckless military adventure is fully neutralized the gallant Ethiopian troops would vacate those hills, if they are in any Eritrean hills that is.

So why is the brutal Eritrean regime asking it’s supporters to stage this demonstrations at this time while thousands of it’s citizens are stranded in limbo all over the world? The reason is the Eritrean thugs in Asmara are stuck between a rock and hard place and the sanctions are taking their toll. The economy of the tiny country is collapsing, the youth are fleeing by the thousands like there is no tomorrow.  The national army which is 100% made up of forced recruits is crumbling. Many international military experts say the Eritrean army exists in empty shells.

The Eritrean government and it’s supporters have been trying to provoke Ethiopia for many years. The Eritrean regime is training, arming, and financing Ethiopian terror groups. Now the Eritreans are dragging the Ethiopian name in the mud one more time.

It will be advisable for Eritreans and their government to address their internal issues without bringing Ethiopia in to their mess. First the Eritrean people should hold onto what they have and what is theirs instead of trying to grab Ethiopian land. If the Eritrean dictator continues his provocation, the consequences will be dire and Eritrea may loose a lot more.

Ethiopia is a safe country for tourists says Gary Quinn

Is Andargachew Tsige a peaceful campaigner or an armed fighter?

Semayawi Party: A new comer with a campaign fund of 42 Million Birr

Ethiopian, Egyptian and Sudanese leaders signed Agreement on Declaration of Principles on GERD

Hailemedhin Abera Tegegn was found guilty of hijacking his plane

Ethiopia will build the first electric cars in Africa

Ethiopia and Djibouti Chose to Swim Together - part two

EOTC versus a kangaroo board of trustees

Ethiopian made cactus pear marmalade to be exported to Italy

The legend of the great Ethiopian drum the Negarit

Ethiopia is too big to fail