Ethiopian Airlines ready to become the largest African Airline in 2015 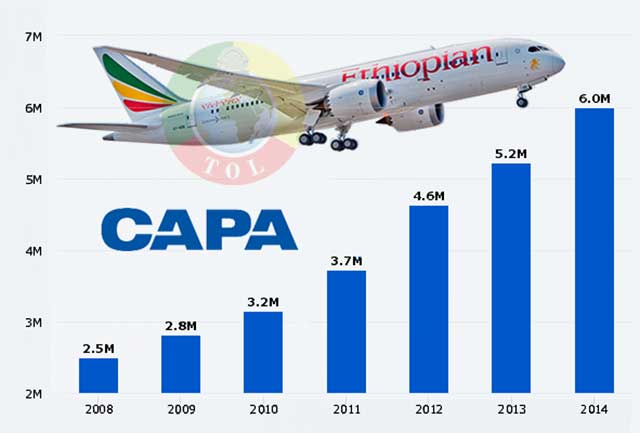 Ethiopian Airlines is planning further fleet and network expansion in 2015, enabling the flag carrier to widen the gap with other leading African carriers. Ethiopian has already become the largest airline in Africa based on fleet size and could overtake South African Airlines (SAA) in 2015 as the largest based on passengers carried.

Ethiopian has doubled in size since the beginning of the decade while most other major African carriers have grown only slightly or not at all. Asia and Africa have been, and will continue to be, the primary drivers as Ethiopian taps the booming Asia-Africa market.

Ethiopian plans to launch services to Tokyo in Apr-2015, which will become its 11th destination in Asia. The carrier will also add its second US destination in Jun-2015 as service to Los Angeles is launched.

Ethiopian to Start flights to Tokyo, the Only Air Service between Japan and Africa

Ethiopia is building a rocket launching station in Tigrai state

Amazing Diplomacy of the terror Regime

Ethiopia should demand for the MI35 helicopter or take military action

Sovereignty and Democracy in Ethiopia: A Reflection on Gebru Asrats Book

I am robbed my house in a broad day light - Ms. Zewde Weldebariam