Historically as many other disciplines, characteristics associated with "manliness" have been valued in the conduct of international politics have only been largely occupied by men. The traditionally male domain existing power structures within the diplomatic infrastructure did not allow women to exercise diplomatic practices in different parts of the world. 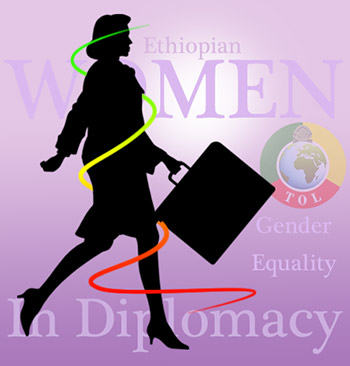 Historically, famous Women political leaders such as Empresses Taytu and Zewditu, Cleopatra VII, Isabella, and Elizabeth I among others, were enormously influential in the history of their country diplomatic relations. However, according to several literatures, historically women by and large played a secondary but substantial role as spouses of diplomats in which they shoulder many responsibilities. Without large fortunes or the necessary assistants the spouses were forced to shoulder greater burdens as they coped with a drifting lifestyle, housewifery, chaotic social schedules, and endless cooking for obligatory entertaining that all immensely contributes for the success of their partners.

The struggles for equality and empowerment of women in any industry have strong links to unequal power relations. The case also applies for women entering the diplomatic world. Bringing women into diplomacy is a symbol of hope and modernization for the 21st Century, yet it can be argued that, they are still underrepresented in different diplomatic positions.

Women are naturally equipped with diplomatic skills such as negotiation, conflict resolution, promoting and maintaining peace. Regarding the skill of negotiation, women have proven themselves to be capable of deciding what is in the best interest of their community whilst making moral judgments that are rational. Speaking before the UN Security Council in May 2002, Terry Greenblatt, ex executive director of Bat Shalom, Israel's national women's peace organization, stated that governments need women because “women are willing to sit together on the same side of the table…with the commitment and intention of not getting up until – in respect and reciprocity – we can get up together and begin our new history”. Generally, the willingness to negotiate and hammer out solutions is an innate trait for women, as the process of engaging in negotiations requires patience, cooperation, careful listening, and mutual understanding.

Women can be effective diplomat as they also have access to areas that are otherwise restricted to male diplomats. As part of preventive diplomatic measures, diplomats in general must be able to tap into the whole of society in order to analyze and anticipate future threats in vulnerable areas. In certain parts of the world where gender segregation is prevalent, men are not able to openly reach out to women and, therefore, are only able to consider half the population within their analysis. As women, female diplomats have access to the other 50 percent of the population, specifically in rural and conservative societies, and are hence able to ensure that the voice and concerns of women are not ignored. The presence of a female diplomat can also be considered symbolic and rallying for local women, especially if she is the only female ambassador serving in the country.

Diplomacy, as being considered for long, is not symbolic of men’s status and views of world affairs, but rather it is reflective of a whole society. With respect to this, diplomacy in the 21st Century as indicated above must be represented equally by men and women of equivalent merit and standing. Women’s equal participation of diplomacy in addition to getting an achievement in the field, it plays a crucial role in the general process of the advancement of women in any field.

After World War II, increasing numbers of women were making a career in diplomacy, and more women became diplomats, both by political appointment and by career progression. Despite these changes, some countries, particularly in the developing world, continued not to recruit women as diplomats, and sending women envoys to represent them was deemed unwise.

Coming to the Ethiopian perspective, as many other countries women make up more than half of the population. The Ethiopian government has realized that any plan and program which fails to take notice of gender equality will not meet its objective of socio-economic and political developments in the country.  All government bodies are encouraged to mainstream gender in various development policies and strategies. It was in this spirit that Ethiopia has now the first female Deputy Prime Minister which demonstrates Ethiopian women's engagement in public decision making. Factors that contribute to these achievements are the guarantees of equality and affirmative action measures embedded in the FDRE constitution, the amendment of discriminatory laws, and the inclusion of gender equality and women empowerment as priority agenda in developmental policies and strategies.

Ethiopian women diplomats, like many women around the world, have experienced similar challenges and obstacles in the past. Fortunately, there have been few important female role models in the field of diplomacy and foreign affairs within Ethiopia. The first female Ethiopian Ambassador was Yodit Imru, started working in the Ministry of Foreign Affairs in 1953, in the department of International Relations and worked from Director General to Vice Minister. She was the first woman diplomat to serve at a senior level during the formative stages of the Ethiopian diplomatic history. The other exemplary most senior career diplomat who has served the Ministry for more than 50 years is Ambassador Konjit Sinegiorghis. She joined the ministry in 1962 and has held numerous positions both in Addis Ababa and overseas.

The Ethiopian Ministry of Foreign Affairs has made great efforts to encourage women's empowerment and carried out a number of important steps to encourage women to take advantage of the available opportunity. In addition to enhancing enrolment of women trainee diplomats from 20% in 2012/13 to 50% in 2014/15 which will bring women to decision making levels, representation of women at ambassadorial  and director level. The Ministry has also established Women, Children and Youth Directorate General which takes steps towards mainstreaming gender in ministry’s day-to-day activities and to deliver for women in line with its mandate. Recently, 7 Ambassadors and  2 Consul Generals of 50 overseas missions are women.

The future is brighter for Ethiopian women to engage in many areas of professions like diplomatic career. But, the long standing stereotypes, patriarchal mentality have to be combated and women themselves can reconcile their work and family life. Diplomatic service in its efforts to retain and maximize the efficiency of women diplomats, should work in empowerment and capacity building through gender mainstreaming practices.

Semayawi Party: A new comer with a campaign fund of 42 Million Birr

Ethiopian, Egyptian and Sudanese leaders signed Agreement on Declaration of Principles on GERD

Hailemedhin Abera Tegegn was found guilty of hijacking his plane

Ethiopia will build the first electric cars in Africa

Ethiopia and Djibouti Chose to Swim Together - part two

EOTC versus a kangaroo board of trustees

Ethiopian made cactus pear marmalade to be exported to Italy

The legend of the great Ethiopian drum the Negarit

Ethiopia is too big to fail