News Release by the Ethiopian Embassy, D.C.
Tigrai Online, May 5, 2015 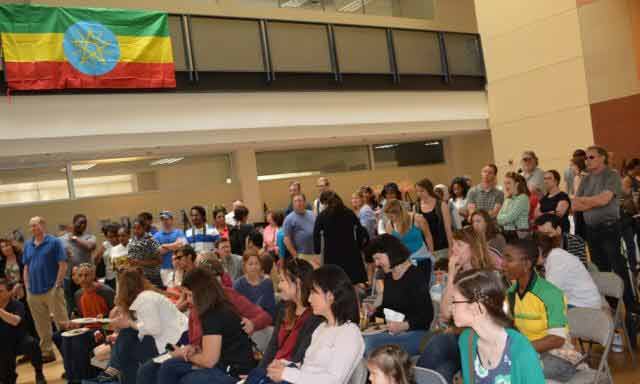 Passport DC, Around the World Embassy highlighting Ethiopian cultural and social extravaganza was colorfully held in the Ethiopian Embassy in Washington Dc.

A-day-long annual event dubbed "Passport DC, Around the World Embassy" highlighting Ethiopian cultural and social extravaganza which attracted more than six thousand residents of the Washington Metropolitan hub was colorfully held in the premises of the Chancery of the Ethiopian Embassy in Washington Dc. on Saturday May 2 2015.

Ethiopian traditional coffee ceremony, beverages, and Honey Wine was served at the event

The open house program was also given an added color by the presentation by vendors of Ethiopian made Apparel Products, Traditional Costumes, Spices, Coffee Beans, Souvenirs, Artifacts & Hand woven bags designed by local Ethiopian seamstress, Ethiopian music CDs and DVDs, Children's books and other tools of learning and delicious Ethiopian cookies and pastries.

What gave a robust impetus to the celebration was the recorded ancient Ethiopian album. Cooking demonstration and Ethiopian Coffee roasting and sample drinking were some of the activities of the full day celebratory get- together that showcased that Ethiopia is a country with a wealth of cultural milieu and exotic fauna and flora.

An Artistic group led by Thomas and students entertained the audience by presenting traditional and cultural Ethiopian music and dances.

An Artistic group led by Thomas and students entertained the audience by presenting traditional and cultural Ethiopian music and dances.

The visitors who have been skyrocketing in number since the program was launched six years ago were entertained by an array of other activities including a visit of the pictorial Art and historical exhibition and on screen displays depicting the rich and diverse historical, cultural, wildlife, and environmental heritage of Ethiopia with amicable people and the country's changing image into a booming 21st century nation.

Tsehaye Debalkew, Media Officer representing, Public Diplomacy and Communications Affairs Department of the Embassy of the Federal Democratic Republic of Ethiopia in Washington DC., addressing the touring visitors on behalf of Ambassador Girma Birru, said that Ethiopia is endowed with a wealth of natural attractions coupled with a mix of its diverse peoples and cultures and a multitude of religious and traditional beliefs and rituals.

He added that it is the birth place of the human species represented by the premier human ancestor Lucy or Dinknesh, a land of the legendary Queen of Sheba, home of the biblical Ark of the Covenant, the source of the Blue Nile, the originator of coffee-Ethiopia's gift to the world and present ly building the Grand Renaissance Dam, number one by continental measure and the seventh biggest dam on earth and the first ever modern light city train transportation system in Africa which is sceduled to begin its services shortly.

In reference to contemporary Ethiopia, the Media Officer from the Public Diplomacy and Communications Department apprised the audience that Ethiopia has opened a new chapter in its history and the world is witnessing that we are both a nation with solid history and an impeccable tradition with a rising economy setting a new standard for Africa.

He further stated that Ethiopia has registered a double digit economic growth for the last twelve consecutive years earning it as a country inking double the African average economic growth per annum by positioning it among the fastest growing economies of the globe.

On hand to welcome the touring visitors were the entire staff members of the Ethiopian Embassy who were adorned with varieties of traditional attires and cultural costumes.

It is estimated that over 8,000 visitors have toured the embassy on this year's "Passport DC" event.

More than Forty Embassies and dozens of cultural institutions in the Washington Metro Area participate in the annual "Around the World Embassy Tour". The event takes place throughout the month of May signifying celebration of international culture in the nation's capital portraying an opportunity to travel the world without leaving DC. The cultural Tourism Extravaganza is a once in a year special event presented by cultural tourism D.C. It is estimated that over 8,000 visitors have toured the embassy on this year's "Passport DC" event.

Strategies to combat and defeat the international menace of ISIS

EBlue party is a leach without a national agenda

Eritrean teens witnessed everything before escaping from ISIS

Press Release by the Ethiopian Embassy in Washington DC

Ethio-Egypt: Beyond the Nile File

Ethiopia is a safe country for tourists says Gary Quinn

Is Andargachew Tsige a peaceful campaigner or an armed fighter?