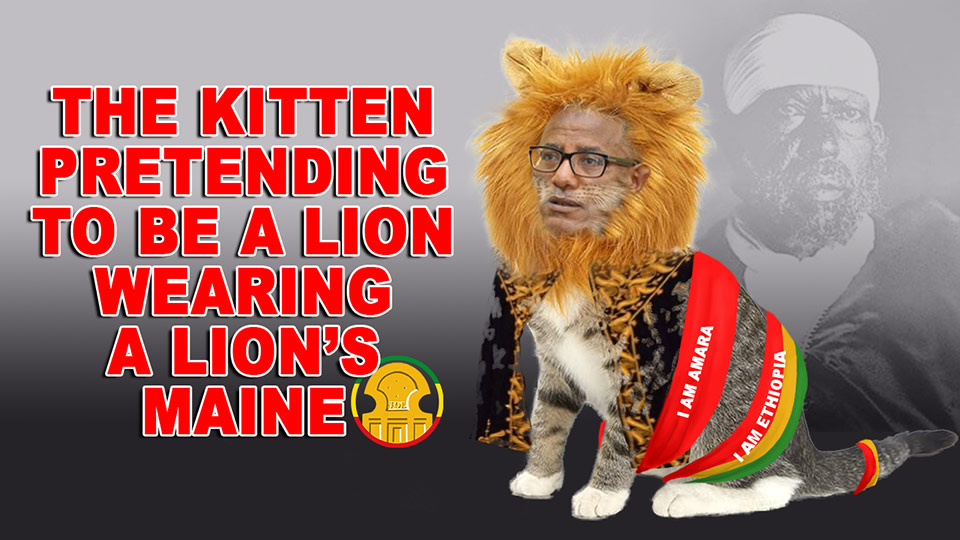 Denying your identity and pretending what you are not will not help in the 2oth century.

Direct people to people reconciliation between the ordinary people of Tigrai and Eritrea is taking place new.


Elite Amharas have been pretending to be something they are not for centuries in the Horn of Africa.  The false Amhara kings robbed Tigrai’s thousands artifacts under false pretense in the past hundred years. After the fraud King Hailesilassie took the throne about eight decades ago, the Amhara elites have revising Ethiopian history making themselves as the founders of all civilizations in Ethiopia. For example the Amhara branded the Axumite Geez alphabets “Amharic alphabets” the fact of the matter is the Amhara people have absolutely nothing to do with the creation of Geez alphabets since its origins are in Axum Tigrai, Southern Eritrea and it is directly related to Tigre (the language of the Tigrae people in Eritrea), Tigringa and the old Sabaen language in Yemen.  We are not denying Amharic has some affinities with Tigringa and Geez, but the connection is feeble. There are no records that show Amharic in witten form older than 400 years old. There are no artifacts, architectural ruins, written records, human remains, or any other finding to that directly ties the Amhara region and its people to the Axumite Kingdom in Tigrai. We challenge anyone to publish it or send it to us and we promise we will publish it as is.


Decade after decade elite Amharas have been building false identity based in false imitation mostly hurting their own identity. The most disappointing fact is the new generation is going backwards, instead of correcting their fathers and grand fathers erroneous path they are intensifying it.

The people of Tigrai and Eritrea have been connecting with each other without an official opening of the border between Tigrai and Eritrea. It was becoming inevitable the people to people connection on both sides of the border will not be stopped as long as the two countries remain in friendly terms. The problems was the love and affection was not supposed to include Tigrai and its people, but that didn’t stop the people so the leaders of the two countries decided to show their faces pretending they are behind the real reconciliation of ordinary people from Tgrai and Eritrea. 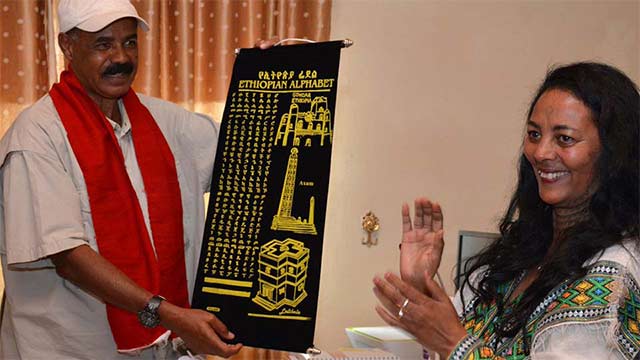 The above photo is so ironic, the Amhara delegation representative is presenting a gift that includes the Axum Geez fedel and Axum obelisks, since when is Axum part of Amhara state and isn't Geez equally Eritrean why is it labeled Ethiopian?

As if to compete with the people of Tigrai genuine desire to connect with their next of kin’s on the other side of the border, the Amhara regional state leaders sent a delegation to Asmara, Eritrea to visit the brutal dictator Isaias Afwerki. To show their appreciation of President Isaias the Amhara delegation brought some gifts. One of the gift items given to Isaias was a painting depicting the Gonder castle, the Axum obelisks, the Axum Geez Fidel, and a Lali-Bela Church. What is mind boggling about this gift is since when did the city of Axum became part of the Amhara regional state and by what calculation is the Axum Geez alphabet the property of Amhara sate? Obviously the Amhara state delegation are not representing the federal government of Ethiopia they are only representing their region and the gift is given to President Isaias in the name of Amhara state, then why did they include Axum obelisks and Geez alphabets in the painting.   This gesture is an excellent example of the elite Amhara’s fake puffing beyond their actual size. It didn’t down to them their fake identity has been exposed for quite some time for all people to see, but they still pretend they represent Ethiopia and its people.

It wouldn’t be that long before the Agaw people’s of the Zagwe Dynasty the actual people who built the Lalibela Churches claim what is theirs.

The new generation Amharas should stop the delusional expansionist and blind ambitions of their fathers. Every square centimeter of Ethiopian land has its owner and Amharas are one of the peoples of Ethiopia and you are entitled to your own land. Amharas are not representative of Ethiopia, they are just one of the many ethnic groups in Ethiopia, period no more no less. There is nothing special about Amharas that make you better than the other 80 ethnic groups found in Ethiopia. The sooner you stop the greedy desire to grab land and history from others the better you will be. If you continue trying to seize everything that does not belong to you, you will end up plunging your region and people to unstoppable conflict in ever corner.

The few candid articles posted this week may not be politically correct, but they are true and they are posted in response to the recent threats aired on ETV by Amhara organizations to the unity of Tigrai. We will be officially asking the Tigrai state government to demand all the Tigrai artifacts to be returned to Tigrai museums from Addis Ababa.

Achieving solutions with farmers is not radical: why is it so hard?

An Ethiopian military light airplane crashed on Thursday, all 17 people on board lost their lives in the accident

Response in a crucible: Dealing with M. Gettaw challenges

Ethiopians, Stand Against Ethnic Violence And The Kilil System

Lemma Megersa and his security apparatus leaders have to stepdown

Do you have full confidence in Prime Minister Abiy Ahmed Ali to lead Ethiopia?