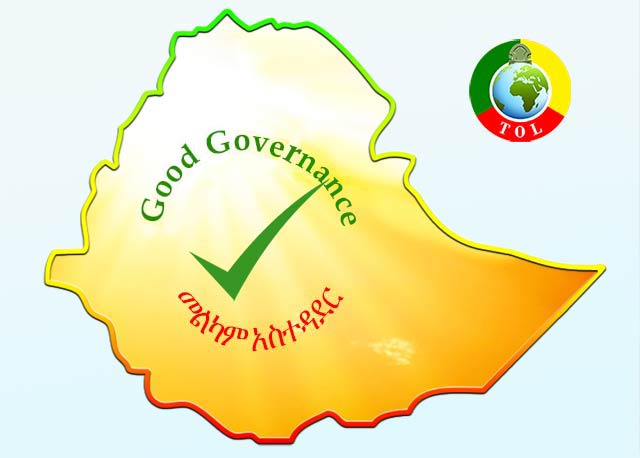 Lack of good governance mainly manifests itself with corruption and bribery in any country including Ethiopia. Corruption and bribery are not new to Ethiopia they have been there for ages. Through the reign of the last King of Ethiopia, bribery was a normal conduct of business. Bribery was given and received openly and justice was delivered based on how wealthy you are and your status in society.


In the Derg time officially the government was against corruption and bribery, but that does not mean there was no corruption. There was plenty of corruption in Derg time, the difference was it was going on underground. Bribery was mainly related to avoid military service, avoid going to prison, send family members (mostly children) to foreign countries, and many other reasons.

Regarding corruption and bribery, this is the Ethiopia inherited by the EPRDF when they came to power. Not only lack of good governance, Ethnic inequality, lopsided distribution of wealth, lack of democracy and justice and disrespect of human rights were rampant in Ethiopia when EPRDF took over power.

The TPLF/EPRDF government addressed most of the issues and results are very clear for all to see in the country. The Ethiopia we remember from 1990 is completely transformed in 2016. The economy is growing fastest than most countries in the world. Power is shared by all Ethiopian ethnic groups and every nation and nationalities is governing itself. There is a little hint of democracy considering Ethiopia has never had any elected government before EPRDF. Many more amazing and exciting developments are taking place in Ethiopia, too many to mention in this short article.

What we want to bring to your attention today is the Lack of good governance and how the anti peace forces are piggy backing on the weakness of the government to destabilize Ethiopia.

From the start the EPRDF government has its work cut out from the first beginning when Tamrat layne, the former Prime Minister of the Transitional Government and later deputy prime minister of Ethiopia was found guilty of corruption and embezzlement charges. Not only that, the former defense minster of Ethiopia Siye Abraha was found guilty of corruption and spent many years in prison although some say he was found guilty on trumped up charges because of his disagreement with some members of the EPRDF government. The above cases are the two heavily publicized once because they are related to top government officials, but it wouldn’t be that hard to imagine how many more corrupted officials there could be throughout the system.

Many times the EPRDF government has tried to cleanse itself from the chronic disease of corruption which is the main cause of bad governance, but it proved to be the most difficult problem the ruling party has encountered.

The TPLF/EPRDF that demolished the Derg army, that is destroying poverty, winning against ethnic division and inequality and the EPRDF that defeated terrorism is struggling to survive against corruption and bad governance. Some of you might ask why that is. The answer is simple, corruption, bribery and lack of good governance are not external enemies, they are internal diseases that the EPRDF and the Ethiopian people should work hard and find the cure for. These are problems that can’t be eliminated completely, but they can be reduced significantly so that they are not in the way of development, justice and human dignity.

The EPRDF party is very lucky there are no opposition parties that are strong, multi ethnic (not those who pretend to speak many languages but working for one ethnic group), true patriotic (not those who are wrapping themselves with not the current Ethiopian flag for show), cohesive, and working for democracy and development. If there was such a party the EPRDF would have been in trouble staying in power.

We know the EPRDF has started public meetings to address the issue of the lack of good governance in Ethiopia, we hope it is real, deep, wide and top to bottom and goes all the way down to the Keble(Kushet) level.

The enemies of the Ethiopian people are banking on this chronic problem to carry them to power because they know that is the only issue that can create a gap between the people and the government.

The Ethiopian people don’t really care about the mountains of lies and propaganda spewed by the Eritrean Satellite Television – ESAT, but they care so much what the local “Guday Asfetsami” facilitators are doing to the justice system. The people should not go through a third party to get things done in any government facility or institution. There should be a direct and unhindered access to any government services including the courts for any Ethiopian citizen.

Tigrai Online had received so many documents and accusations of corruption against individuals and branches of ministries over the years. Without going to details those accusations mainly relate to:

Land for housing and business permits

Getting power and water to houses and business

Getting Yellow Card, Birth Certificate, and other documents for Diaspora Ethiopians


If EPRDF does not address these urgent issues, there are forces waiting and salivating to ignite the next fire. Deep cleansing should start right at the core of the government and spread down to the grass root level. The usual town hall meetings, a few episodes of TV programs, an eloquent speech from a government official or a few hundred arrests are not going to cut it this time. It has to be done the right way and show tangible results for the public to see.


Egypt is grappling with reality of the Grand Ethiopian Renaissance Dam

From Kinijit 97 to Guenbot-7: The same old wine in a new bottle

Have your say, How did the EPRDF handle the recent crisis in Ethiopia?

The Ethiopian Prime Minister promised terrorists will be dealt with mercilessly

Critical time for Ethiopia with its challenges and the unpredictable pangs

Famine and Development: Contradiction in terms in the Ethiopian Context

Current state of the Judiciary in Ethiopia

Ethiopia will become a Middle Income Country by 2025 - World Bank

Ethiopians celebrate 35th anniversary of ANDM in in Washington D.C.